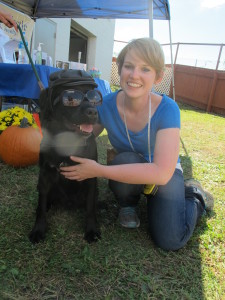 Lindsay started at Cubby’s in August of 2010 as a daycare attendant, became an Assistant Manager in 2011, and started her current position as General Manager in May of 2013. Before starting at Cubby’s she studied Psychology at Albright College followed by two years of doing volunteer work with AmeriCorps NCCC and City Year Greater Philadelphia. She gained her previous dog experience throughout her years at college and service at numerous animal shelters, including working with pets affected by Hurricane Katrina in New Orleans. Learning about dog behavior has been her favorite thing about working at Cubby’s. She also loves all her canine friends she has made. When she is not at Cubby’s, she enjoys painting, as well as collecting other hobbies. She has one dog of her own, a mutt named Banjo.